Dutch Police have just released some details of a mass shooting/suicide that took place today at Irdeto's Headquarters in Hoofddorp, The Netherlands.

Allegedly Irdeto's CEO, **** *******, took 2 semi-automatic pistols out of his jacket while heading a Board meeting for all Directors & proceeded to rapidly fire bullets repeatedly into every member present until his magazines were empty. He then reloaded one of the pistols & shot himself through the roof of the mouth. There was no survivors.

At this stage a motive is still to be fully determined but witnesses outside the office say Mr *******'s voice was raised before the shooting & they distinctly heard him shout "Why is the latest iteration of Denuvo not stopping these fucking pirates!". After that they say he very quickly pulled the 2 pistols out from concealed holsters crossways across his chest & began rapidly firing at all the Directors while yelling the famous line from the Die Hard movie "Yippee ki-yay, motherfuckers!

At this stage that is all Police are releasing to media but it is known that every single Director of Irdeto was killed in this incident, mainly by bullets hitting them in the head.

Further investigation is ongoing & we will release further information as it comes to hand.

(Please note that at time of printing we were legally barred from releasing the alleged killer's name. This may change as things develop). 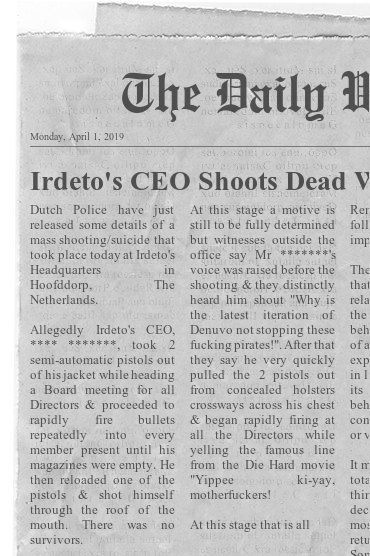 wtf!!
Easy Links For Navigating Around The Site
KaOs Game Releases | Game Issues | Broken Links
(Always use the forum instead of PMing us)
“To alcohol! The cause of... and solution to... all of life's problems”
― Matt Groening
Top

Must've been one of THOSE days!